Uk Tourism and tourist information. The uk has been a popular tourist destination for many years. Visitors often bought souvenirs of their visit. Many of these gifts were made by Manorware. Company History

Truscotts, named after one of it's three founders was initially based in Bath. In 1949 the firm then moved to Newton Abbot where they initially manufactured children's toys.

In 1952 the firm moved Sheffield where they took up residence in the listed 16th Century Manor House from where they got the name for their new range of souvenir pottery made of cast plaster which they began to mass produce. (The Manor House has featured in the BBC TV show Restoration).

Early Manor Ware items tend to featureManor Ware pottery was first produced from an idea by three men in 1948, Derek Truscott, Anthony Brian Gibbs and John Stanley Cooper, in a small building in Bath. The firm produced small plaster cast models and grew into one of the largest manufacturers of this type of souvenir in the country.

The small company moved to Newton Abbot in 1949 and one of their earliest pieces was 'Dolly's Tea Set' which consisted of a set of plates and imitation food, laid out for presentation purposes on a card.

In 1952 they relocated to a sixteenth century listed building in Newton Abbot called Manor House, where the mass production of souvenir pottery began in earnest; and the items produced were christened 'Manor Ware' after the house. Manor Works was at 63 Wolborough Street. They were sold from souvenir shops from hundreds of British holiday resorts and exports have been found from places such as Ireland, Canada and Australia, and some items were exported without place names on. It is also believed that some places, such as Eire, actually copied items. Production was running at around 125,000 pieces a year.

In 1960 the firm moved again to a purpose built factory at Brunel Road, Newton Abbot. The introduction of mechanisation coupled with stick-on transfers to replace the previously embossed hand painted pieces saw production rise to over 1,000,000 pieces a year. By the late 1970s cheap imported souvenirs were flooding the market and by 1987, after several ineffective cutbacks, the factory was forced to close.

John Cooper was one of the directors of the firm and was also the main designer and his initials JC can be found on some of the pieces. There are over 500 known designs and another designer to have initials on pieces was Stuart Andrew Royston (SAR). John Cooper apparently laid out the basic design and Stuart Royston completed them.

Jane Lake who worked for the firm from 1953 to 1956 used to work in the paint room. She was transferred to the dipping department which involved dipping the pottery in a tank of lacquer, putting each item on a spike to drain - a hundred items in all - then taking them off one by one and wiping the bottom and transferring onto a metal wire tray and putting in a large oven. This process was repeated twice to get a good finish.

embossed and/or hand painted designs,however when the firm moved to a purpose build factory in 1960 they began to employ transfer printing technologies which enabled them to vastly increase production.

Manor Ware continued to sell well until the late 1970s when cheap imports, and the change in peoples holiday habits began to impact the business which went into decline and finally closed in 1987.

This information is based on that provided in an article by Leslie Pinder for the Autumn 2005 issue of Egg Cup World ( the magazine of the 'Egg Cup Collectors' Club of GB') which can be found here.

Manorware made products that were individual to the town or tourist site. 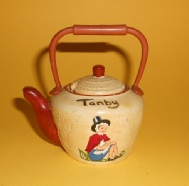